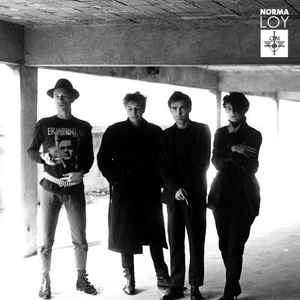 Profile:
Usher (aka Anthon Shield) and Chelsea (aka Reed 013) met in 1977. They published books, organised exhibitions and performances and started up music with the band "Metal Radiant" (noise punk and Stooges’ spirit), then with "Coit Bergman" (more electronic and influenced by Suicide).

In 1981 they formed "Norma Loy" (Alan Vega himself gave them the name), around which evolved different musicians.
The band was connected to the french fanzine New Wave which set up a label, and launched a first EP called "Norma Loy". In 1984, the band created their own label, CPM, wich developed and centralised all of the band different activities (musical and non musical: (photo)graphics, literature, video, dance etc... and manage all artistic production (recordings, artworks, sleeves...).
In 1986, Norma Loy included Buto dance and performed with the Fovea group and Sumako Koseki. Concerts were then conceived as multi-media performances, mixing musicians and dancers, videos and pictures. 1991/1992 were years of several changes (musicians, record and publishing companies...), and in 1993 Norma Loy decided to suspend their activities.