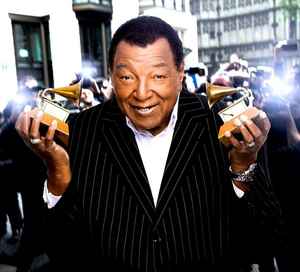 Real Name:
Robert L. Martin
Profile:
Producer, arranger - songwriter (Born on 4 May 1930 in Ohio - Died on 6 September 2013 in San Diego, California)
He moved Philadelphia in 1951. He met Kenneth Gamble in 1955, and he began working with Kenneth Gamble in the year 1966. That was the beginning of The Sound of Philadelphia! It was also the transition from Soul to R&B. Bobby Martin is a founder of R&B, he's often referred to as The Granddaddy of R&B. Martin made a big name for himself at Philadelphia International Records, Columbia Records, Warner Bros. Records Inc., and at A&M Records to name a few.
Business profiles:
Bobby Martin Productions (Production Company)
Red Ruby Records (Record Label)

However, the sounds of not only jazz, but country & western were in the bag of textures that producer/arranger Bobby Martin utilized in developing the popular Philly soul sound. When it comes to producing and arranging Soul Music, R&B, and Disco, Bobby Martin Ranks real high, somewhere close to Gamble & Huff. Bobby Martin, Thom Bell, Kenneth Gamble & Leon Huff worked as a team. They were the key arrangers and producers at Philadelphia International Records. Both Arrangers Thom Bell and Bobby Martin became even more in demand among a roster of artists that included Fred Tavares, Harold Melvin & the Blue Notes, the O'Jays and Patti LaBelle & the Bluebells who Bobby Martin discovered in 1960.

Martin was producing hit songs in Philadelphia before producers Gamble & Huff began producing records. Various critics have weighed in on Bobby Martin's innovations and have compared him to Quincy Jones, while the man himself has eloquently expressed his own point of view through his spectacular music. Quincy Jones himself commended Bobby Martin personally while working side by side with him at A&M Records. Bobby Martin has admired the works of Quincy Jones and Michael Jackson, and he has a high level of respect for Quincy and his Jazz compositions.

Bobby Martins jazz background was of utmost importance, no great shock considering to what extent swinging music has influenced so many performers to come out of the Liberty Bell state. Bobby Martin met Quincy Jones back when Quincy used to play on the road back in 1955 in Philadelphia. Martin was producing and recording R&B and Soul, back then "Q" (Quincy Jones) didn't recognize Bobby Martin as a Jazz musician, composer, arranger. However, Jazz can be heard from the top to the bottom in Martin's gorgeous concoctions. Quincy Jones mentioned this in one of his compilation CDs. How martin’s production of Thad Jones & Mel Lewis sounded like Duke Ellington’s work.

Bobby Martins jazz chops went into his writing for horn sections, and in addition the choice of musicians in an extremely effective house band named "MFSB" also played a big part. On the subject of these session musicians, the son of two singers from Philadelphia, who played French horn on a few MFSB studio sessions IS NOT THE SAME BOBBY MARTIN. And although he played on studio sessions for as a multi-instrumentalist, he is not the famous African American producer/arranger named Bobby Martin. The famous producer and arranger named Bobby Martin is African American and the other is not. This Grammy and platinum award winning R&B/Soul/Disco/Funk producer that’s mentioned in this biography is not a multi-instrumentalist, and he did not play with Frank Zappa.

Another one of the players held most responsible for the genre's stylistic integrity was drummer Earl Young. It has been said that this percussionist's style was more influenced by the giants of bebop such as Max Roach and Art Blakey than either the typical Motown sound or the hard backbeat associated with drummer Al Jackson, among others. However, Bobby Martin is not just stuck on Jazz or country, or in any other genre. And he’s also said to be one of the founders of disco music due to his powerful string and horn arrangements, along with his funky MFSB danceable rhythm sections. The Sound of Philadelphia sound was complimented with Bobby Martins arrangements, which were actual compositions and orchestrations that he created. A songwriter has a different job to do, as well as the producer and musicians. Bobby Martin usually arranged his own productions and he always did the arrangements on the hit songs that he wrote.

Martin was, and still is a triple threat, active as a producer, songwriter, and arranger. He also tended to give additional input to some of the performers he worked with, above and beyond giving advice of a purely musical nature. One of the best examples of this is his involvement with a singer originally named Patti Holt. First Bobby Martin came up with the idea of naming her quartet after the Philadelphia record label Bluebell Records. Next, Bobby Martin suggested that (Patricia) Patti Holt change her own surname to Patti LaBelle, and so the group was named Patti LaBelle & the Bluebelles. That was the start of Patti LaBelle and her success.

To mention all of Bobby Martins productions and arrangements in one discussion would be impossible, we are talking hundreds of records. Some accounts trace Martin's career back to a recording studio that was located in the basement of a car dealership owned by Harold B. Robinson. And a few of Bobby Martins productions date back into the 1950s along with his success he had as a member and arranger for the Lynn Hope Orchestra. Bobby Martin was taught by Jazz legends such as Frank Foster and Lionel Hampton. When the Dreamlovers cut the song entitled "When We Get Married" in the early '60s, all the participants in the session had to first clamber around rows of DeSotos and Plymouths and dodge lurking salesmen in order to access the basement door and the two-track recording kingdom that lay beneath. By the end of the decade the action had switched to the larger Sigma Sound Studios. This was where the house band operating under the co-operative name of MFSB convened; the acronym stood for "Mother Father Sister Brother."

Next they made history by influencing and changing American music, they had a new sound that would change the music of the 1960s and 1970s. Rather than Berry Gordy and Motown being the only successful African American Owned Record label, now you had people like Bobby Martin working as producers and executives in the music industry. Philadelphia International Records and Bobby Martin had just as big as an impact on American Music, pop and disco, but mainly Soul an R&B Music. Bobby Martin was producing, arranging and composing gold and platinum hits left and right, along with producers Kenny Gamble and Leon Huff at Philadelphia International Records.

In 1973, television host Don Cornelius contacted Kenny Gamble, Leon Huff and Bobby Martin with the idea of coming up with a theme song for a new national dance show, the immortal "Soul Train". Bobby Martin did the compositions and arrangements for these sessions, which also involved a vocal group, "The Three Degrees." A year later the theme song had become so popular that it was released on its own as a single record. "T.S.O.P. (The Sound of Philadelphia)," soon after it hit the top of both pop and R&B charts, and Bobby Martin won another Grammy for that song. While working at Philadelphia International Records Bobby Martin's career continued at other record labels such as Columbia Records.

Bobby Martin produced the Manhattans for Clive Davis. "Blue Lovett" (The vocalist) has mentioned in interviews that he felt the hit power of sides such as "Kiss and Say Goodbye", which was originated partially from the modern country influences Bobby Martin brought into R&B music. This was before solo artist Lionel Richie had become known in this way. Martin was also the first producer/Arranger to add strings to Soul and R&B music. This was on Patti LaBelle And The Bluebells first album. After forming his own production company named Bobby Martin Productions, the legendary producer then returned directly back to his jazz roots, producing the Killer Joe, a 1977 hit album featuring saxophonist and composer Benny Golson and Quincy Jones.

After Philadelphia International Records slowed down in the late 1970s early 1980s Bobby Martin moved out to sunny California only to win another Grammy Award for a production he did on The Bee Gees album Saturday Night Fever. There's a whole lot more to this discussion including facts, pictures, records, discographies and biographies about the legendary Bobby Martin. He is best known for arranging and producing the music of top icons in the music industry including The Jacksons, The O’ Jays, L.T.D., Lou Rawls, Tavares, MFSB, Patti LaBelle, The Manhattans, The Intruders, Dusty Springfield, Larry Graham, Quincy Jones, Harold Melvin & The Blue notes, Jerry Butler, Billy Paul, Nancy Wilson, Jean Terrell, Teddy Pendergrass, The Bee Gees, Whitney Houston, Don Cornelius, Sweet Inspirations, The Intruders, Archie Bell & The Drells, The Three Degrees, Continental 4, and so forth. The list of hit songs and records goes on and on. Most of us remember Bobby Martin for hits like “Me And Mrs. Jones”, and “You’ll Never Find a Love Like Mine.”