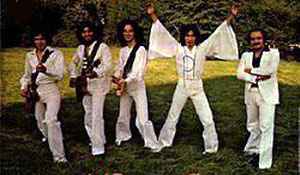 Profile:
I Santo California are an Italian musical group founded in 1974. They are best known for their debut single "Tornerò" which became an international no. 1 hit in 1975.

History
The group was founded by five musicians originating from Campania, Southern Italy. Originally called La Nuova Frontiera, the band was performing in clubs and beach resorts in the Amalfi Coast. In 1974, during a concert in Nocera Inferiore, they caught the attention of Elio Palumbo who helped them sign a contract with Italian label Yep Record in Rome. At that point, the band had changed the name to I Santo California.

They released their debut single, "Tornerò", at the end of 1974. The sentimental love ballad was a major hit in Italy and Switzerland where it spent multiple weeks at no. 1 in 1975. In Switzerland, "Tornerò" became the best-selling single of the year. It also reached the top 5 in Germany and Austria, and the band's debut album charted within the top 20 in Italy.
The follow-up single, "Un angelo", from the album of the same, peaked no. 2 in Italy and no. 10 in Switzerland in spring 1976. The band continued the international success with "Dolce amore mio" which reached no. 6 in Italy and no. 3 in Switzerland. In 1977, I Santo California took part in Sanremo Music Festival with the song "Monica", which placed third in the contest and became another international hit for the band. In 1978, they scored their last top 10 hit in Italy, "Manuela, amore!". After that, I Santo California's popularity decreased and the group struggled to achieve success in the charts.

In 1994, the band released the new album 1994 Per un mondo migliore on which they explored spiritual themes.