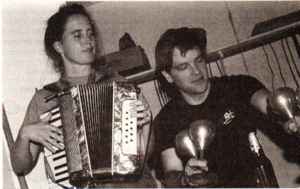 Profile:
Michael Gendreau and Suzanne Dycus-Gendreau have been working under the name Crawling With Tarts from 1983 to 1998. They have released musical work on cassette and vinyl and have appeared on several compilations. In 1991 they released a video collection which included their works made with video, 8mm film, and with the PXL2000 camera. Their musical work ranges from structured composition to free improvisation, and their output documents a varied approach to music as well as highlighting collaborative efforts which have spanned the years and the globe.
Sites:
o-art.org
Members:
Cliff Neighbors, Michael Gendreau, Suzanne Dycus-Gendreau
Variations:
Viewing All | Crawling With Tarts
CWT, Crawling W' Tarts, Crawling W/ Tarts