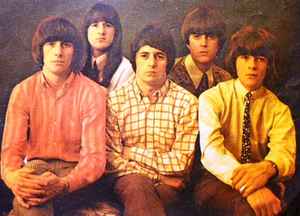 Profile:
The Motowns were a British beat music group (1966-1970) during the second half of the sixties known in Italy as part of the so-called British invasion.
The group was founded in Liverpool by guitarist Douglas Albert Meakin (born March 17, 1945 ), a school friends of Beatles' drummer Ringo Starr, who in the early sixties played in specialized youth ensembles in Merseysound .

The members of the group were:

Arrived in Florence just in the days of a 1966 flood , in which they lost most of their instruments and their amplification system.
Disbanded when in 1970,lead singer Lally Stott chose to pursue a solo career, but was killed in a traffic accident in 1977 while riding a small commuter bike close to his home town of Prescot. The other members became session musicians with their own storied backgrounds.