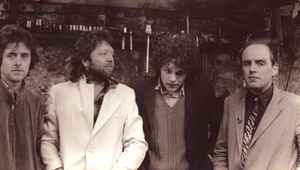 Real Name:
The Fans
Profile:
The Fans were formed in 1978 in Bristol, England. The Bristol music scene was humming at the time and The Fans very quickly became not only one of the city's premier bands but also of the UK. The band were enthralled by the same vision of creating quality songs at a speed which reflected the genre of the time. The principal song writer was George, who had already had chart success with his earlier band George and the Dragons. Rob had already had considerable success with Uncle Po, whose members included Gavin King on vocals (later to form The Private Dicks) and Helen O'Hara (later to join Dexys Midnight Runners on violin).

The Fans first single was an EP released in 1979 on the newly formed Fried Egg record label - "Givin' Me That Look In Your Eyes" c/w "Stay The Night" and their version of the Jim Reeve's song "He'll Have To Go". Following great success, their second single was released on Fried Egg in 1980 with the songs "You Don't Live Here Anymore" c/w "Following you". At this point the band secured a major publishing deal but internal frictions about musical direction caused the band to split. George ,Barry and Rob continued to play together for a short while under the name of The Trainspotters, recording an unreleased single "Hold 'Im Joe".

Barry went on to follow a solo career as a singer songwriter. George moved to France, where he still lives, playing solo and band gigs around the country. Rob went on to play with The Tropics, Tropical Hearts, MHW and Wise Children. as well forming The Skull Academy. Tony became a much sought after session drummer. Both The Fans singles were picked up by Japanese indie label 1977 Records and re-released in 2001. A CD album containing the singles, demos and live recordings from a Bristol gig was released on 1977 Records in 2004. Most recently, top Japanese metal/punk band Brahman have recorded a version of "You Don't Live Here Anymore" which was released on their 4th album "Antinomy" in February 2008.
Sites:
bristolarchiverecords.com
Variations:
Viewing All | The Fans (5)
Fans