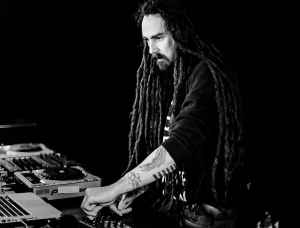 Real Name:
Jason Köhnen
Profile:
Bong-Ra's trademark 'jungle rock' style has been moulded over the past 6 to 7 years to become a recognizable and addictive sound. Although his compositions and tracks may vary there's always an adrenaline rush of some sort buzzing around. Mostly recognized for his part in the 'Yardcore' or 'Raggacore' sub genre, his tracks differ significantly and crossover ranges of styles which have played a part in his musical development, be it Metal, Gabba, Jazz, Rave or Jungle...and so on. Most important is the energy and mood of each track produced.

In 2001 Clash Records was set up to release vinyl series of 7-inches with hardcore ragga jungle mayhem, seeing there wasn't much of that stuff being released around that time. In 2004 second label Kriss Records was set up to release more mash-up breakcore anarchy as 4-track EP's on 12-inch. The 'Breakcore a Go-Go!' nights we're the first Dutch regular bi-monthly hosted by Bong-Ra and FFF, which saw smashing line-ups running from 2002 to 2003, nowadays 'The Junglist' hardcore jungle nights in Rotterdam are the current regular monthly nights hosted by Clash Records.

Probably the highlight of Bong-Ra's career is the session for the late John Peel. After having the honours of meeting the 'Godlike Genius' himself, Peel asked Bong-Ra to do a session which was aired on 21st of February 2002. Many tunes were played regularly and has been a huge help in getting the sound spread around.

When it comes to the performances it's either a DJ set or an Audio/Visual set. Bong-Ra's first 'tour' with DJ Scud and Soundmurderer in the UK proved to be a success. Holland's biggest festivals (Lowlands, Eurosonic and Metropolis) we're conquered in 2003, and A/V performances at Impakt Festival, Sonic Acts and Rotterdam Film Festival and the exposition at the Museum for Modern Arts in Arnhem show the Arty Farty side to Bong-Ra.
Sites:
bong-ra.com, Facebook, MySpace, YouTube, SoundCloud, Bandcamp
Aliases:
Dr Azzacov, Ebenezer Gumsville, Glowstyx, Jason Kohnen, Killahman Machine, Pagan Bacchus, Porcelain Minotaurs, The Goat Of Mendes, The Lovecraft Sextet, White Darkness
Variations:
Viewing All | Bong-Ra
Bong Ra, Bong-Ra 'Necro-Corpse Mutilator', Bong.Ra, BongRa, Bongra

September 12, 2003
One of the few dutch producers to make Jungle-oriented, experimental Drum & Bass and Breakcore. His productions are quite dense, firing amen beats and basses on the listener. Through his label Clash he releases the harder material varying from ragga-core to utter trash-core. Also check the Bikini Bandits project he's in.
Reply Notify me 4 Helpful