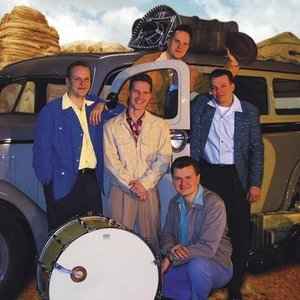 Profile:
THE BARNSHAKERS (By Shaun Mather)

There must be something in the frozen waters of Scandinavia that keeps producing these razor-sharp rockabilly bands. The list is seemingly endless with bands like Jack Baymoore & the Bandits, Wildfire Willie, Hal Peters and one of the best, The Barnshakers. The first time I came across them was as the backing band on Darrel Higham's High Class Baby album. By the time I'd listened to the first few beats on Five Minutes To Live I was well and truly hooked.

The band sort of formed by accident when Goofin' Records president, Pete Hakonen booked the legendary rocker Johnny Carroll for a gig in Finalnd in 1992. And while filling the venue wasn't a problem for Hakonen, fulfilling the date was - he didn't have a band. He talked four musicians from various bands like The Whistle Bait and Hal Peters String Busters to form a band to do the honour. And so the Barnshakers were born with Vesa Haaja on vocals and guitar, Jussi Huhtakangas a.k.a. Lester Peabody on lead guitar, Mika Liikari on double bass and Mike Salminen on drums. The band hit it off straight away and it wasn't too long (1993) before they were in the studio cutting a 10" album, Cool Enough, for Goofin'. Later that year they cut a single She Done Quit Me, again for Goofin' and one (Big Sandy) the following year for Willie Lewis' Rockabilly Records out of Colorado.

The next EP, Complicated Fool came out in '94, followed by their first CD, A Honky Tonk Session for Goofin'. They toured Europe for the next couple of years and they backed High Noon's Shaun Young on his Scandinavian tour. They also backed him for his solo Goofin' album, Red Hot Daddy. In '96 they scored a record hop favourite with the Wiggle Like a Worm 45. That year also saw them undertake their first US tour on the back of their latest Goofin' release, String-O-Rama.

A lot of their early singles, the 10" LP and other odds and sods were complied by On The Hill Records for the 1998 release Barnyard Stomp. In 1999 they backed the smouldering Marti Brom for a Scandinavian tour, and ended up recording the Maybe I Do EP with her in Sweden, at Jo-Allans legendary vintage studio. They rejoined her for her Snake Ranch album, along with Texan T. Jarrod Bonta on piano. It was a fantastic effort from both the Barnshakers and Brom, with the likes of Blue tattoo and Eat My Words being particularly grand.

2001 saw the release of the brilliant mini album North of Juarez on Goofin', recorded with the bands newest addition, Harri Saanio on piano. A highlight of the year for the band was a tour in France backing the one and only Hank Thompson. Their sound, always authentic and always tight, must have been ideal for the great man.

In 2002 a 300 copy limited addition 45 coupling Boppin' In Roswell and Raining in My Heart was released to critical acclaim, followed shortly after by their finest album to date, Five Minutes to Live.