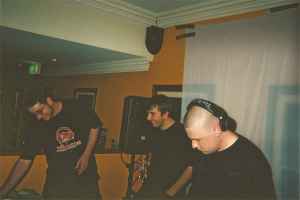 Profile:
Australian Hardcore Techno/Terror/Breakcore act from Newcastle.
Most famous for their raw productions (called "Cheapcore" by themselves) on Amiga's ProTracker and their early records on Industrial Strength Records. The English translation of the German word "Nasenbluten" is "nose-bleed".

Mark N is a DJ, producer and the DMC 1997 NSW Technics DJ Champion. He now runs the Noise-X-Change record shop and has recorded under the alias Overcast.

Aaron Lubinski's was also know as Xylocaine, Data & Medical Suction with releases on the Dead Girl and Bloody Fist imprints.

Nasenbluten released a number of EPs on ISR including a ‘Bloody Fist Sampler’ (which included a number of other artists from their labels). Their tracks were licensed to many compilations including ‘Thunderdome’ and on labels such as React, ID&T and Sound Base Music. Nasenbluten also remixed ‘Insurge’ which was released on Warner Music Australia.
Sites:
bloodyfist.com.au, MySpace, Wikipedia
Members:
Aaron Lubinski, David Melo, Mark Newlands
Variations:
Viewing All | Nasenbluten
Nasen Bluten, Nasenblueten, Nasnebluten, Nasnenbluten

November 29, 2019
Does anyone know if there are going to be any represses of Nasenbluten's tapes/records? Can't find any info online and there seem to have been a few minor ones through last 3 years so im wondering over it
Reply  See 2 replies Notify me Helpful

If you have never seen Mark N. deejay, and you like turntablism you should youtube some of his videos, he is on a Dj Q-bert like level with his beat juggling and scratching, except to a whole lot more out there musically.