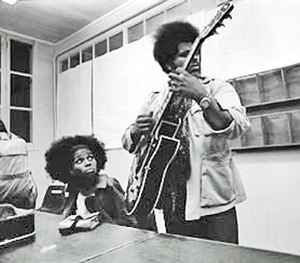 Real Name:
Warren Harding Sharrock
Profile:
Sonny Sharrock was one of the first American free-jazz guitarists. He played in the '60s with Miles Davis, Pharoah Sanders, Roy Ayers, Herbie Mann and many other greats. He has also recorded three solo LPs at the beginning of the '70s with his wife Linda Sharrock on vocals before discreetly disappearing from the musical scene.
In 1978 he was undergoing a divorce with Linda Sharrock.

His career started again in the beginning of the '80s when he met Bill Laswell, who hired him to form the Free-Rock-Jazz-Noise Last Exit quartet (with Ronald Shannon Jackson and Peter Brötzmann) between 1986 and 1990.