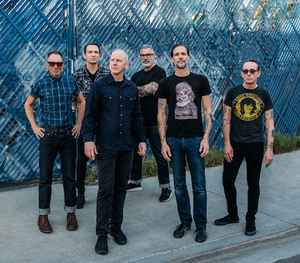 Profile:
Punk/Rock band formed in 1980 in San Fernando Valley/Los Angeles, CA, US by Greg Graffin (vocals), Brett Gurewitz (guitar), Jay Ziskrout (drums), and Jay Bentley (bass). All the members were teenagers when the band started. Only Graffin has remained with the band through every phase of its career, although Bentley and Gurewitz have participated for substantial chunks of time. Graffin and Gurewitz are the band's primary songwriters, with other members contributing occasionally. The band is known for their rapid-fire songs with a melodic edge and strong backing harmonies.

Bad Religion released their first record, a self-titled EP, in 1981 on Epitaph Records, a label Gurewitz started after borrowing money from his father. The band released their first full length, "How Could Hell Be Any Worse?", in 1982. Midway through the recording for the album, Ziskrout quit the band and the record was finished with drummer Pete Finestone. In 1983, the band abruptly shifted gears, issuing the keyboard-heavy, prog rock influenced "Into The Unknown", on which neither Bentley (who quit during the recording of the first track) nor Finestone appeared. The results were disastrous, with the band facing considerable backlash from fans and Epitaph immediately pulling the album off record store shelves. For his part, Gurewitz blamed his participation on his increasing drug habit, although he was quick to point out that the sober Graffin had no such excuse to fall back on, and has disowned the album. With Epitaph out of money and the band's reputation in tatters, Gurewitz quit and the band split. Graffin soon moved out of state for college, but returned to California in 1984 and was convinced by Circle Jerks guitarist Greg Hetson to reform Bad Religion with him on guitar. Recruiting Pete Finestone and bassist Tim Gallegos, the band issued a 12" EP, called "Back To The Known", with Gurewitz producing but not playing on the record.

Graffin and Hetson spent the next few years playing sporadically with various line-ups. Eventually, Finestone and Bentley returned on a full-time basis. In 1987, a newly sober Brett Gurewitz returned to the fold and the band continued as a five-piece. In 1988, Bad Religion issued a new LP, "Suffer", to enthusiastic fans and critics. This lineup released 2 more albums before Finestone departed in 1991. He was replaced by Bobby Schayer. In 1993, immediately following the release of their 7th LP, "Recipe For Hate", the band jumped from Epitaph to Atlantic Records. Following the release of 1994's "Stranger Than Fiction", Brett Gurewitz left the group. Officially, it was said that his reason for leaving was to concentrate on Epitaph following the huge commercial success of the album "Smash" by The Offspring, and he also expressed displeasure with the band's deal with Atlantic. However, it was later revealed the Gurewitz's primary reason for leaving was due to tension with Bentley (in 1996, Gurewitz released a single with his new band, Daredevils, whose A-side, "Hate You" was written about Bentley). Graffin and Gurewitz also publicly feuded for a short time after the departure. Gurewitz was replaced by Brian Baker (ex-Minor Threat and Dag Nasty). The band would record 3 more albums for Atlantic with Graffin as the primary songwriter, although 1998's "No Substance" featured significant contributions from the other members of Bad Religion. However, the albums were met with largely mixed critical and commercial responses. Meanwhile, Gurewitz had relapsed into drug abuse and faced a number of personal and legal problems. In 2000, a cleaned-up and sober Gurewitz made a guest appearance on the band's LP, "The New America", prompting rumors of a reunion. The album was the group's last for Atlantic.

Following the release of "The New America", Bobby Schayer exited the group, as a shoulder injury barred him from playing drums. His replacement was Brooks Wackerman (ex-Suicidal Tendencies). In 2001, it was announced that not only had Brett Gurewitz rejoined the band, but that they would also be returning to Epitaph Records. It turned out the Brett's role would be mostly limited to songwriting and production, as his work with Epitaph makes extended touring impractical, although he would make appearances with the band when they performed in Los Angeles. It was also revealed that since the reunion, Gurewitz rarely actually plays guitar on the albums. Most of the guitar parts are recorded by Brian Baker as he is the most proficient guitarist, although Gurewitz does record parts if he wants to. The band has continued to record and tour steadily since returning to Epitaph. In 2013, Greg Hetson stopped touring with the group due to undisclosed personal issues. Guitarist Mike Dimkich stepped into fill the role and in early 2014, it was announced that Hetson had left the group and Dimkich would be a permanent member. In the fall of 2015, drummer Brooks Wackerman left the group and joined Avenged Sevenfold. He was replaced by Jamie Miller.
Sites:
badreligion.com, thebrpage.net, MySpace, Facebook, flickr.com, Wikipedia, genius.com, Twitter, instagram.com
Members:
Bobby Schayer, Brett Gurewitz, Brian Baker, Brooks Wackerman, Davy Goldman, Greg Graffin, Greg Hetson, Jamie Miller, Jay Bentley, Jay Ziskrout, Keith Lehrer, Mike Dimkich, Paul Dedona, Pete Finestone, Tim Gallegos
Variations:
Viewing All | Bad Religion
Bud Religion, 壞宗教樂隊

March 19, 2021
I've got a bad religion 7" with only covers on it, chuck berry, r.e.o. speed wagon, led zeppelin and Richard berry.... seems to be very old with.an orange sleeve with a picture of them on the cover with their names..... I don't see it listed here and it doesn't even seem to have a record label on it. maybe released before epitaph? anyone have any info???
See 3 replies

February 22, 2021
Where the hell is Emancipation of the Mind? Certainly not under Miscellaneous.

Edit:I think it's that all of the Miscellaneous releases are marked Promo.

I wish they would sell an empty lp box !!!
Maybe with extra space for maxis
Or collector lps.
;-)

April 29, 2018
Why isn't Back To The Known repressed? Seriously it needs to see vinyl again.

June 3, 2016
Bad Religion are and have ever been the most progressive and musically demanding Punk Rock Band.
You can listen to each record, no matter in which mood you are. You getting into the flow immediately!

March 18, 2016
You can find leaders and followers on the b-side bonus disc with no substance

May 12, 2013
I actually have that song on two singles,the stranger than fiction and 21st century digital boy. They be an imported release though.

April 1, 2013
I noticed that you guys are missing a song Bad Religion did for the Clerks Soundtrack called Leaders and Followers. Unfortunately can only be obtained once you purchase the Clerks soundtrack, which was released back on October 10th 1994. It's a really good song and it's too bad they never re-released it either as a single or on a compilation CD like All Ages.
See 8 replies