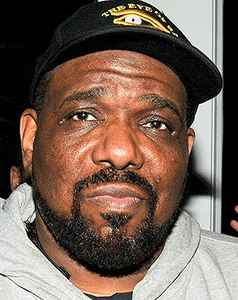 He grew up in New York’s South Bronx, his musical eclecticism matched by his vision of African American social and racial unity. In the mid-1970's he was one of the pioneers of New York’s emergent Hip-Hop culture of Rapping, DJ Mixing/Scratching, Graffiti and Breakdancing. Along with two other Bronx DJs, Grandmaster Flash and Kool DJ Herc (both also of West Indian origin), he began playing small percussive sections from obscure and unexpected rock, funk and electro-pop records as a rhythm track for rappers, interspersing the beats with extracts from cartoon melodies and film themes.

Inspired by the British film 'Zulu', Bambaataa had founded a loosely convened organization of hip-hop's cultural luminaries, called the 'Universal Zulu Nation'. Described as both a fan and a master of records, Bambaataa achieved one of his lifetime ambitions in 1984 by recording "Unity", a duet with James Brown.

April 20, 2022
word so comments are left up for about a week and a half until they're deleted. yall are some fuckin weirdos for that discogs
See 1 reply