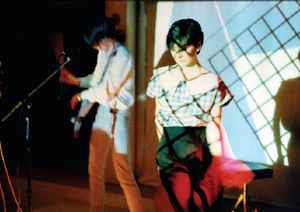 Profile:
Linear Movement was a side-project of Peter Bonne between 1982 and 1984, next to his activities in Autumn and Twilight Ritual. Because of the difference in musical style, he decided this music should be part of a different project, which he baptized ‘Linear Movement’. Most of the tracks were solo-experiments, but in some of them, he was joined by Peter Koutstaal (who also performed in Autumn), and by Lieve Van Steerteghem, who took the vocal part in some tracks.

Linear Movement never made a tape release, but many tracks appeared on compilation projects throughout the world. The Micrart releases of Linear Movement are limited to a single C30-release MC 8208 ‘Pulse Music’, which contained early material by Peter solo, and a major contribution to the Line Compilation MC 8340.

Peter wanted to experiment with more poppy compositions as where Twilight Ritual and Autumn were more experimental. This direction was already taken when Autumn shifted from pure cosmic electronic music based inspiration towards song based compositions (refer to MC 8204 Not Afraid To Die). However, this mixture of experiments needed guidance and a certain separation. The poppy songs now resided under Linear Movement. For Peter, it was a boiling pot and learning curve towards his later work with A Split-Second.