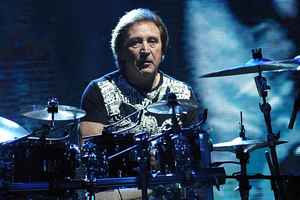 Real Name:
Kenneth Thomas Jones
Profile:
British rock drummer, born 16 September 1948 in Whitechapel, London, England. He is best known for his work in the groups Small Faces, Faces (3), and The Who. Jones was inducted into the Rock and Roll Hall of Fame in 2012 as a member of Small Faces/Faces. Sometimes credited as 'Kenney Jones'.