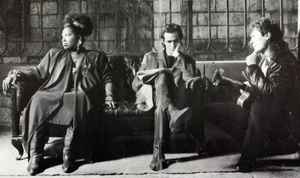 Profile:
American-Franco-Welsh rock trio, active from around 1990 to 1996, composed of singer Jean-Jacques Goldman, Carole Fredericks and Michael Jones, the latter having previously been his backing vocalist and guitarist.

Under this name, they recorded two studio albums (Fredericks Goldman Jones and Rouge), and toured several times. The order of the three names in that of the trio simply follows alphabetical order.