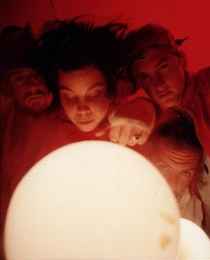 Profile:
The Constructus Corporation was a project of Watkin Tudor Jones who was previously in rap rock/jazz hip-hop act Max Normal.

In early 2002, having summarily disbanded that band just as they were cracking mainstream cross-over and relocated from Johannesburg to Cape Town, Mr Jones assembled the musical/production talents of Sibot and Markus Wormstorm, female vocalist Anica The Snufling (aka Yolandi Visser) and producer Felix Laband to form the Constructus Corporation. In late 2002 they managed to deliver one of South African music’s most original concept albums, a CD/graphic novel package The Ziggurat, which combines futuristic storytelling and sound effects with vocal performances. Unfortunately the band self-destructed after a farcical six-week delay in the album’s release (involving wrong cliché designs being printed, customs confiscating and then losing 3000 CDs, and a printing bill over which a dispute with the label’s distributor almost bankrupted the label).