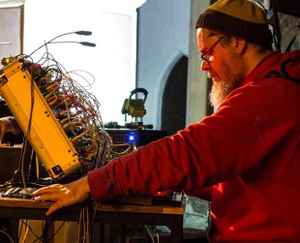 Profile:
Richard Scott is a British composer, improviser and producer. Closely associated with London Musician’s Collective in the early eighties. Scott moved to Manchester in 1991 and currently lives between Manchester and Berlin. He studied saxophone with Elton Dean and Steve Lacy and played for many years in groups such as Bark! and Pool. Recorded The Magnificence of Stereo with Rex Casswell in 1992. Promotes Auxxx and Basic Electricity concert series in Berlin. He now performs with analogue modular synthesizers and laptop with various controllers such as Buchla Lightning, WiGi and Buchla Thunder. Several of his electroacoustic works premiered at the MANTIS (Manchester Theatre in Sound) and FutureEverything festivals between 2009 and 2011. He performed Richard Scott's Lightning Ensemble at Manchester Jazz festival in 20101 and performed and presented at the International Computer Music Conference 2011.