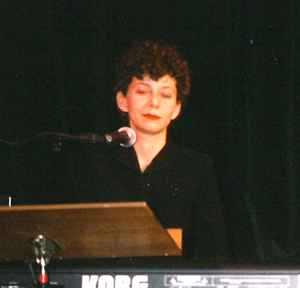 Profile:
Born in Montréal, Marie Goyette studied the piano in Montréal and London. After residing in Europe, she moved to Berlin in 1989. Inspired by the city's lively and unorthodox art scene, she started a second career and expand her activities from traditional concerts to the fields of performance and radio art. She spent several months in STEIM in Amsterdam between 1991 and 1993 where she did experimental work with interactive tap shoes. She produced radio plays such as 'Transatlantique' (1993), worked on theatre projects and directed her own works. Marie Goyette collaborated with various artists like Christian Boltanski, Dagmar Krause ('A scientific dream and a French kiss') and Chris Cutler and started performing in Heiner Goebbels theatre works in 1994, the latest being 'Hashirigaki'. Moving between sampler and concert piano, Goyette freely interchanges fragments of her repertoire. With a musical ear for timbre, ambiance and timing, she combines in a fresh, improvised way these different elements in real-time concerts. Her performance in 'The Repetition' earned her the reputation of a "human sampler" - with an emphasis on "human".
In Groups:
p53
Variations:
Viewing All | Marie Goyette
Goyette, Marie