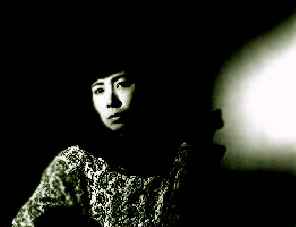 Real Name:
天鼓
Profile:
Tenko is best known in Japan as co-founder of the five-women band Mizutama Shobodan (Polka-Dot Fire Brigade). They made two LP's The Virgin Prayers - Da! Da! Da! (1981) and Sky full of Red Petals (1985), both on Tenko's own Kinniku Bijo label. Parallel to this work was The Honeymoons, an improvising voice duo. Their album Laughing Myth was released in 1982. Their two shows, presented at the International Women's Music Festival in Montreal in '88 were among the highlights of that event. In 1984 Tenko appeared in the New York music scene as a solist. She toured (Victoriaville, Moers, Zurich, Vienna) with the David Moss' Dense Band, has performed with the New York visitors to Japan (John Zorn, Elliot Sharp, Ned Rothenberg, {a=Christian Marclay] and others), and is no stranger to clubs like CBGB, The Knitting Factory, Roulette and The Kitchen. It was these ties that led to her first solo LP Slope/Graduel Disappearence, which brought together musicians from all of her activities and linked her song-writing and improvising in unusual ways. Slope, a unique and powerful statement, introduced Tenko to a much wider audience. Her Uzo Muzo group was invited to Strasbourg's Musica Festival in 1987, and she toured as a duo with Fred Frith in '88 and '89, including performances at the Taktlos Festival in Switzerland. In '89 she performed at Moers, the Glasgow Jazz Festival and in London's Queen Elisabeth Hall (with Fred Frith's Keep the Dog). The next year she performed in Legend of Rain (a collaboration with Zeena Parkins) at the New Music America festival in Montreal. The piece was recorded in 1992 and released in '93. Her solo CD At The Top of Mt. Brocken was recorded in Tokyo with ten other Japanese musicians she carefully selected. After that the duo with Ikue Mori Death Praxis was recorded in New York. In 1993-94 Tenko studied Speech and Drama at the Emerson College in England. She gave the "voice performance" for the theatre project Das Fest zum Mord, which was produced by proT in Munchen in October '94. Tenko's new band, Dragon Blue, composed of herself and four other Japanese musicians, was formed in March 1992. In more recent years Tenko has devoted much of her energy to working both as a song-writer and as a theatrical solo voice performer.
Sites:
sigov.si, tenko-voice.com
In Groups:
Death Praxis, Dragon Blue, Microcosmos (2), Mizutama Shobodan, The Honeymoons
Variations:
Viewing All | Tenko
Tenko Ueno, 天 鼓, 天鼓