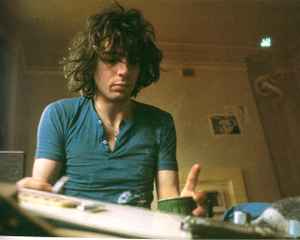 A key figure in the development of London's underground music scene during the late 1960s, and—despite his rather brief period of activity—a continuing influence on popular (and unpopular) music onward into the 21st century. Unfortunately, soon after achieving success with Pink Floyd, he began to suffer from mental problems, possibly complicated by drug use, from which he never fully recovered.

Having become increasingly unpredictable in person and unreliable as a performer, he was pushed out of the band in 1968. He continued with a brief solo career, releasing eclectic albums The Madcap Laughs and Barrett, before leaving the music industry and spending the rest of his life living in relative seclusion.

In 1972 he was in the brief super-group "Stars" that played a small number of live concerts in Cambridge in February 1972. Its members were Syd Barrett on guitar, Twink on drums, and Jack Monck on bass .

Barrett had an infamous "reunion" with Pink Floyd in 1975, when he showed up at the mixing session for Shine On You Crazy Diamond, ironically a song written in tribute to him. His appearance—overweight and shaven-haired—shocked and saddened his former bandmates.

August 1, 2020
Birdie hop, he do,
He hop along
A lonely bird upon
A window there, he, he
There he blow
A windy snow, he knew the snow
I know the snow, a hoppy bird
Reply Notify me 3 Helpful

September 27, 2016
Here's hoping that we get a 2017-18 box that compiles all of Syd's unreleased material, in the vein of the recent Floyd box. There's so much of his stuff out there ready for release, unlike his former band.

I'd buy it.
Reply Notify me 5 Helpful

September 15, 2016
Syd is pink. and no one else. but Syd Barrett
Reply Notify me 1 Helpful

December 1, 2007
Everyone knows who Syd Barrett (Roger Keith Barrett). Without Syd there would have been no Pink Floyd. Syd Barrett lead the band during their beginning years, writing most of their music and lyrics, playing lead guitar and singing lead vocals. In March of 1967 Syd's association with the Pink Floyd band that he created ended.

Syd went on to record two solo albums, 'The Madcap Laughs' and 'Barrett'. Syd later performed with the group Stars, a band located in the Cambridge England area, but left them after 3 gigs, hence virtually vanishing from the public till his death July 7, 2006.

Some of Syd's music has a whimsical childlike feel, almost stories, then it hits you, the play with words, various meanings to a line, mysteryous lyrics spiraling thru your mind whilst his guitar sings surreal notes, using very unique special effects, the outcome, trance like riffs would quickly errupt into intense, slightly off kilter strumming, obscure chanting vocals, tense verses with explosive choruses. Syd is thought to be musical virtuoso. Syd's style was described by critics in several ways, 'clumsy and anarchic', 'adventurous and distinctive', 'idiosyncratic', 'revolutionary', also 'brilliant' and 'painful' but do not be fooled by some of the negativity. Syd uses every concievable style of guitar mastering one can imagine, quite frankly he knew his instrument intimatly and pushed it to the limit.

Syd is considered the originater of psychedelic music in the 60's. Psychedelia is the term used to describe his hauntingly captivating sound.

Syd's obvious influence on Pink Floyd can still be felt long after he was gone from the group. Continueing without Syd Barrett was difficult, since the public as well as music industry thought Syd was the band.

Syd Barrett did not get his fair share of the recognition that should be bestowed upon him, for without Syd Barretts influence and genious, Pink Floyd would not exist today. Syd's time with Pink Floyd still hails as some of rock and rolls most
sensational, and expressive, playing recorded by a guitarist.
Reply  See 1 reply Notify me 10 Helpful

Despite his early passing away, and having been a ghost for the last thirty years, he will rest an icon for psychedelic music and indeed one of the founder of that kind of rock.

The first album with Pink Floyd, "The Piper At The Gates Of Dawn" when came out in 1967 was something never heard before and nowadays it's still an amazing masterpiece.