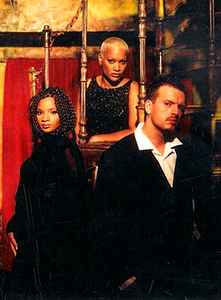 Profile:
Real McCoy is a German Eurodance / Pop music project that was internationally successful throughout the 1990s with the hit songs "Another Night", "Automatic Lover (Call for Love)", "Run Away," "Love & Devotion," "Come and Get Your Love", "One More Time" and the multi-platinum album Another Night.

Before 1995, Real McCoy was known in Europe as M.C.Sar & The Real McCoy.The music production team responsible for the group's success, Juergen Wind (J. Wind) and Frank Hassas (Quickmix), wrote and produced the project's main hits between 1993 and 1994 under the team name "Freshline" in Berlin, Germany. During the early stages of the project's European success in 1994, German rapper Olaf Jeglitza (O-Jay) and American singer Patricia Petersen (Patsy) fronted the act as a rapper-singer duo. By mid-1994, singer Vanessa Mason had joined the group as the third member of the live act. At the height of the group's worldwide crossover success in 1995, Jeglitza, Petersen and Mason were officially branded as a trio act under the shortened project name Real McCoy. Many years after the break up of the project, Petersen and Mason were revealed to have not been the real singers of the act. Both women had in fact been miming the vocals of studio singer Karin Kasar for all the group's music videos and live performances between 1993 and 1995.

The final Real McCoy album One More Time was released in 1997. Wind produced the album without Hassas involvement. He instead worked with a producer duo team known as The Berman Brothers and the team that had produced additional songs for the Another Night album. After Petersen's unexpected departure from the project, singer Lisa Cork was quickly recruited into the act by American songwriter/producer Brent Argovitz. Since Kasar was no longer involved in recording vocals for the album, Cork and Mason had to sing vocals instead. Jeglitza and Argovitz also worked together as songwriters for the production. The lead single (also titled One More Time) achieved major commercial success in Canada and Australia, but the commercial sales of the album and the follow-up singles failed in comparison to Another Night. The commercial failure ultimately caused the quick demise of the project's lineup in 1997.

Between 1999 and 2000 two new Real McCoy singles were released with an all new artist lineup. The single "It's On You," an updated version of the projects original 1990 hit, and an all new cover single "Hey Now." Both singles became commercial failures resulting in the permanent breakup of the production team. In the years after the breakup, Jeglitza continued to release new Real McCoy singles independently without Wind or Hassas' involvement, but failed to achieve success with new releases.