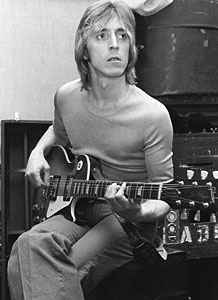 As a child he learnt to play the piano, recorder, violin, harmonium, before moving on to the guitar. In November 1963, he joined his first band called The Mariners, aged 17. They were followed by The Crestas, whom he left in 1965 and moved to London. There he joined The Voice (8), but this proved untimely as they were disbanded a short time later. Next was a soul band called The Wanted, but this was also short-lived and he moved back to Hull.

In 1966, he joined The Rats who changed their name to Treacle in 1968. Then in 1970 he was asked to join the David Bowie backing band The Hype, and on 5th February 1970 he made his debut for Bowie playing on his Peel Sessions, recorded for the BBC's Radio 1. The backing band began to record their own music and would go on to release in their own right. Ronson also started to work with Bowie on the arrangements, as well as arranging and producing for other artists. He ceased working with David Bowie in 1973, and began concentrating on his solo work and producing. He was for a short time a member of Mott The Hoople and had a band called The Hunter Ronson Band with Ian Hunter.

Though he died in London, he was buried in Eastern Cemetery in his hometown.

Rest... In... Peace... by crimsonmetal74
Guitarists Contributing To My VINYL Craze by d-of
Favorite Artists by 11able
Top 10 - Guitarists Named Mick by spinmarket
“Guitar Gods” by crimsonmetal74
Psych, Classic by TiemoOTheYordle
Artists for the Future by Milesbeet-hoven1
“All Music Guide: Required Listening-Classic Rock” by crimsonmetal74
Top 40 Favourite Glam Rock Artists of the 70s by BAHAMABOY
Artists in My LP Collection by sillypenta
View More Lists →