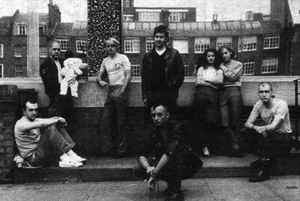 Profile:
Formed: 1981 in Hackney, London, United Kingdom by Genesis P-Orridge and Peter Christopherson (after Throbbing Gristle ceased to exist) with Alex Fergusson. Soon, PTV became a post industrial supergroup, expanding the core line-up with the talents of frequent collaborators Monte Cazazza, David Tibet, and John Balance, which led to the classic 1983 album Dreams Less Sweet. After Peter and John's departure in late 1984 to concentrate on their Coil project, Psychic TV's style evolved more in the direction of psychedelic or acid rock, then called "hyperdelic" rock by the band, a style they would return to in later years. In 1988, Alex Fergusson departed, and a move back to more electronic based music took place, featuring the talents of Fred Giannelli, Greedy Beat Syndicate, and Richard Schiessl. PTV were found at the forefront of acid house with the fake compilations "Acid Tablets Volume One", "Tekno Acid Beat", and various releases featuring rotating line-ups under different monikers (Mistress Mix, Sickmob, & DJ Doktor Megatrip).

Well documented constant touring and recording took its toll. A relocation to the USA in 1993, the closure of the band's independent label Temple Records in 1994, and perhaps most prominently the separation from Paula P-Orridge left Genesis P. Orridge to be the only permanent member of Psychic TV. The name "Psychic TV & Genesis P-Orridge" was used for a number of Psychic TV re-releases and experimental projects by Genesis P-Orridge and Larry Thrasher, before Genesis formed Thee Majesty with Bryin Dall. A final concert was announced and held at the Royal Festival Hall, London in May 1999.

September 8, 2021
The below thread is interesting. Including what kmanthie says (hidden in a “reply”), bringing Crowleyism in as reference to the occult, which was definitely a part of Orridge’s dialogue. Music is so many different things, includes beauty and ugliness, order and disorder. Psychic TV happened at a particular time, when the west was recoiling from a rampant drug scene, drugs taken without inhibition, limits were pushed and mocked. Porridge was then, partly a result of that. Psychic TV represents the disordered side of music, chaos, the occult, tearing things apart, frustration, madness – PTV would be whatever porridge P’O would manifest in a given moment.

It can be difficult to confront an entire catalogue of an artist’s life when they have created so much and it is complete. I was there at the beginning, it helps me decipher PTV identity to remember what my perception of PTV at that time was. Rather than a vision which can be occluded by myth. I bought Dreams Less Sweet (not FTHOC) and I bought a few other things in the early years (Unclean, NYScum, Godstar etc). I had an interest in punk, then post punk and what it all lead to. Lana Del Rey for instance is highly polished music, but its seamier side couldn’t have existed without punk (generalised comment).

Time passing, I would be flipping through records wondering what to buy, every now and then I’d come across a Psychic TV item and I would look at it. Should I buy it? P’O knew how to get attention, but could he keep it? Because I’d already bought a few PTV things and not really been satisfied, I found them more as beguiling but ultimately pretentious in the sense of pretending to be something. In fact I wonder if a key ingredient of PTV seems to be mockery of culture and establishment; take that away, what is left which is true creation? [This is where I have to be wary, because there are many out there who appreciate PTV and their music holds meaning for them.]

The early Eighties to me represent a hugely fertile musical landscape. Obviously Genesis (funny name!) was there at the beginning (?) Surely Bach was before Genesis? A primordial porridge. P’O was present amongst all these other names which time would prove to be important: members of Coil, Soft Cell, Industrial music. And then influences outside of music, Genesis P’O providing music for Derek Jarman (Coil doing the same). I’d see P’Orridge filmed in interviews, I much preferred that side, he could be lucid and state profound comments particularly about love and desire. I preferred P’O, the person, to his performance self, and when I say that I mean the TV-interviewed person – all I know of P’O is the projected image.

When artists become part of our culture it seems unfair they have to undergo this grilling, but that is the price. Culturally, they have contributed and in order to understand what they have contributed, they make their selves prone to being studied. Labelling people can be barbaric, you miss bits of the person, and the negative comments can seem abusive. However, I’d like to know whether any psychological labels applied. Looking at his wide eyes, there is a certain ‘friedness’ there. He’s looking everywhere, taking it all in, no borders. Huxley’s doors of perception. A certain awareness of the Abyss. Did P’O make it out of the Abyss? He goes from one thing to the other, distraction . . .

P’O PLAYS with being God, on his self and wanting followers. Looking at the books available by P’O there is the highly serious looking Psychick Bible, rooting itself firmly in the occult, and then books about reshaping gender. Two critical issues, the latter bound with P’O’s love for Lady Jaye. However, for a polar view of a loving relationship, look at CosiFTutti’s account where there are questions of P’O being a sadistic aggressor (the Guardian). And reasons for escaping the UK after damaging false allegations of “satanic ritual abuse” (Channel 4 Dispatches). Excuse me? It is all very confusing, how does anybody put themselves into this arena? And he’s worth millions: put that ingredient in. Tutti’s comment is very telling: “just wanted followers, not people to contribute. [She was] very dominant, we had no fun.”

The Art World where people seek attention. What is that dynamic? Can the artist lose the self, be consumed by it all?

It could be said tearing things apart is a good thing, society can then build it up better. It is important also to say we need to question where REAL credit is due – is credit due to those who tear something apart or to those who then rebuild? Both? I’m not so sure. Of course humanity is all in this mess together and without certain key events, something ‘very important’ may never have happened. Shade is what gives light definition? Inescapably, some things do have more relevance than others. As example, looking at Coil’s work, also with occult links, it has a more exacting craft to it, the entire Coil opus (to, say, 2005) is very broad, despite its aesthetics of chance it demonstrates carefully directed growth, it is also strongly cohesive.

A vast discography to choose from - musically speaking, some of it amazing, some of it hugely over-rated. PTV were/are both, a force and a freak of nature. Creepy, in-your-face excursions into the unknown, revealing the dirt from beneath the surface. Anyone with open ears (and minds) will try and accept it either as philosophy or the blackest ever black humour, the rest if easily intimidated are recommended to stay away. Surely you cannot dismiss nor deny PTV's mega-cultural significance, thanks to a number of people that gathered around the idea with Genesis P-Orridge, the collective's top constant, announcing recently s/he is preparing to give up life on this planet, and this certainly means one great big hole in the cultural world after he/r departure, with PTV's legacy remaining scattered forever after.

"Force The Hand Of Chance", "Dreams Less Sweet", "Allegory And Self" and "Towards Thee Infinite Beat" remain the focal ace points from which many other records of theirs take cue, with varying experimental, psychedelic, ritual or plain (dull) rock results - you make your pick. Hard to believe it all comes from the same group (or what's left ov it all these years) but that's what makes it all the more daring.

As for their cult (in literal sense) videos, watch them at your own risk.

July 22, 2015
A curious melange of styles as GPO tried to settle on something that would make money, I fear. The early material, for those of us who were there, was outstanding in the post-industrial genre. Hyperdelia offered much more in terms of accessibility but didn't deliver at the time commercially. The ritual side projects (Themes) were great if you were a Templar or just a fan of bizarre noise. The Acid House era was energising and fun but also not always the best works of the band. Later material has been harking back to Hyperdelia to a degree, not sure where I stand with it. I loved the Tellies, and I guess I always will, difficult to identify a single stand-out album.

January 7, 2014
PTV3 is currently the official name of the touring group headed as always by
the lovely Ms. P. Orridge. More prolific than the Grateful Dead ever was and
have recently gained control of the helm aboard the legendary "Silver Machine"
sonic spaceship once piloted by space rock mentors "Hawkwind!" and refuse to be
in more than seven dimensions at one time without a trip reset switch at their disposal.
See 1 reply

January 1, 2014
more clearly: he's existentailizing. each new ad-ition adds another segment, like a curvature, around his project(the psychic cross organization,-or whatever have you that defines what seems to be a global, multi-language firm. ....when it is up and running properly.).the styles are to coum degree commesurate with a larger topicality...be it cut-up writing assembly, or ambience-of-rave-statementing.
s/he's a shipbuilder.

PTV have amazing tracks for each individual to choose and dared to speak about many things that nobody else dared until them (like creating a religious movement devoted mainly to Magick and the Individual).
In truth PTV is GPO and members who play with him on each record with some problems arising btw GPO and many musicians. GPO doesn't seem stable enough... If 2 days ago he was into industrial music, 1 day ago into trance, today into spoken word nobody can really guaratee you that todays true isn't tomorrows lie.
Interesting to observe and study, but not much more (this is warning, lol!). Sometimes he reminds me of a modern Crowley version... but not so amazing.

November 19, 2002
PTV are this generations "Merry Pranksters". Although I'm not a big fan of their sometimes noisy early output, their influence in the Acid/Techno scene cannot be denied. Anyone who mixes fucked-up politics, electronics and religious spoofing like Genesis P. Orridge deserves proper recognition.
See 1 reply