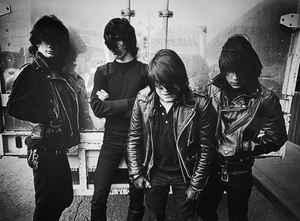 Profile:
Samhain was formed in 1983 in Lodi, New Jersey, by vocalist Glenn Danzig and bassist Eerie Von following the breakup of The Misfits. The idea for Samhain, though, had allegedly been conceived a few years prior to that and a number of songs for the project were written while Danzig was still in the Misfits (the Misfits also recorded a few songs that Danzig had written with Samhain in mind). After tossing around several line-ups, the band was completed with Steve Zing, another Lodi native and former classmate of Von's, on drums. Danzig would also handle guitar duties, although former Minor Threat guitarist Lyle Preslar played with the band at their first show and recorded several songs with the band. Eschewing the straight up punk sound and horror movie image of the Misfits, Samhain played a more goth and atmospheric style of music with some punk and metal overtones and the lyrics focused more on the occult and real life violence. Following the recording, but prior to the release of their first album, 1984's "Initium", Pete Marshall (aka "Damien") joined the band as guitarist. Steve Zing quit the band in 1985, either tiring of touring or Danzig's complete control of the band (depending on who one was talking to at the time) and was replaced by former Reptile House (2) drummer London May. This line-up would record the band's second LP, "November-Coming-Fire", which would be the band's last release during their lifetime. The band caught the attention of Rick Rubin, who was initially interested in signing Danzig to a solo career. Up to that point, all of Samhain's music was being released through Danzig's Plan 9 record label, but he was finding that the operation was becoming too big to manage on his own. However, Danzig refused to ditch Eerie Von. Around the signing with Rubin, Damien was fired from the group and was replaced with John Christ. The new band planned to record a 3rd LP, called "Samhain Grim", but when London May was fired from the band the project was scrapped and the band was reconstituted as Danzig. In 1990, Danzig and Von completed work on five tracks meant for "Samhain Grim" which ended up constituting the first half of "Final Descent" (the album was originally rounded out by a remixed version of the band's "Unholy Passion" EP).

In 1999, Danzig organized a brief Samhain reunion which consisted of Steve Zing and London May alternating between bass and drums, and Todd Youth filling in on guitar. Damien was unable to participate due to commitments with Iggy Pop and Eerie Von was not invited to participate because, according to Danzig, no one involved was interested in having him take part (Von, for his part, has stated he would not take part without Damien's involvement) . After the tour, Zing, May, and Youth would form Son Of Sam (4) with Davey Havok. The group released an album in 2001 (Danzig makes a guest appearance).

In 2001, a long-talked-about Samhain boxset was finally released. It included the band's 3 LPs, the remixed version of "Unholy Passion", and a previously unreleased live album (all discs have since been released separately from the box set). This marked the reissue of the Samhain catalog, which went out of print after a lawsuit settlement between Glenn Danzig and Misfits' bassist Jerry Only marked the end of Plan 9 Records in 1995.

March 1, 2022
How about an official re-release of the entire Samhain catalogue on CD and LP? The CD boxed set was 22 years ago!

February 26, 2022
What sucks is I have OG pressings of all of them Very scared to play them. I have a repress of November and initium on coloured vinyl. They sound good. But so far the 85 mix of unholy passion has yet to see the light of day. I am dying for this. It is their best.

March 25, 2019
I understand why there are legal difficulties to reissuing the first few Danzig albums, but these Samhain albums are on Plan 9. Does anyone know why these haven't been reissued?
See 5 replies

All of Samhain's material is out of print and it doesn't look like any reissues are going to happen anytime soon so be prepared to pay a lot for any album on any format.