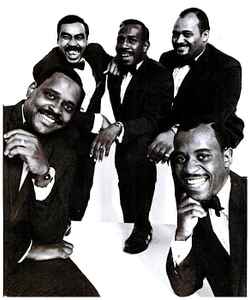 Profile:
Donald Banks, Albert Berry, Norman Burnett, and George Hilliard were all native Philadelphians when in 1956 they formed their first group The Latineers. After several years of struggling on the "chitlin circuit" they seemed doomed to becoming nothing more than another "hitless" bar band.
In 1960 they decided that The Latineers, the name, might be holding them back and changed the formal group name to the catchy "Tymes." With the name change a decision to bring in a lead vocalist was made and George Williams won an audition for the less than coveted spot.
Sites:
Wikipedia, whosampled.com
Members:
Al "Caesar" Berry, Charles Nixon, Donald Banks (2), George Hilliard, George Williams (4), Jerry Ferguson, Melanie Moore, Norman Burnett, Ron E. Richardson, Terri Gonzalez
Variations:
Viewing All | The Tymes
The Thymes, Thymes, Tymes, ザ・タイムス