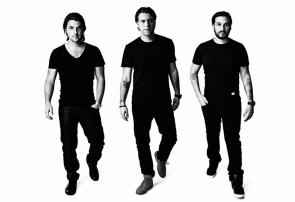 The name 'Swedish House Mafia' emerged around 2003; the group did two gigs together in Sweden. Prydz left Sweden and moved to the UK due to high demand from clubs in Europe. The group officially formed in late 2008, comprising Axwell, Ingrosso and Angello. They released "Leave The World Behind" in 2009, but were assigned individual artist credits for the song. The first single credited to Swedish House Mafia was "One" in 2010.

On March 25, 2018, the group reunited with their surprise closing set at the 20th Anniversary of Ultra Music Festival in Miami, 2018.

March 7, 2021
SHM is group of 3 djs with a big history, they wrote their own names, their own careers, they are 3 friends who used to play in clubs and festivals, people liked them back in the early days, and years later people still listen to their music, they maybe went to big room as most people say, but this doesn't change their history and how they became what they are. I think it's better that they broke up in 2013, because SHM was not same as in the beginning, and also their sound would change for the worse, they are back and they look refreshed. Don't forget their sets on amnesia, dark forest and many more, these guys have a talent and they gonna prove it again, and yea maybe the sets where pre-reocorded, but guess they where not the only djs back in the time.
Reply Notify me Helpful

May 1, 2019
damn, this site fucking hated these dudes when they were first a thing, lol
Reply Notify me 3 Helpful

October 28, 2018
Who can forget the huge success of their Dark Forest concept back in 2009? It's during this year mostly that the SHM concept took its unstoppable rise in the industry.

One must remember the influence those guys had back then (and still do to some extent, but probably not as much as they did 10 years ago, especially Steve Angello). They were setting the trends big time. A simple example would be the track Leave The World Behind, made by them, Laidback Luke and Deborah Cox. That track is a huge House classic, and confirmed their domination as the track was being played everywhere, and also popped up on Beatport during the entire year of its release (the remixes, plus a special version). 1 year later, after the best SHM summer yet, they play some new track at Ultra Music Festival in March 2010. This brand new exciting track was One, a very unique track back then which is probably the 1st Big Room track as we design them nowadays. The SHM act was officially a producing moniker.

Things couldn't look brighter. One, then Miami 2 Ibiza, which is a huge example of what a proper production is (The Tinie Tempah haters won't deny how great the Instrumental Mix is), put them on a spree of good productions together. Those guys seemed unstoppable. Complete that with the release of their excellent compilation Until One, and things were just perfect.

This ended pretty quickly with the release of Save the World, which is their worst track imo. I never really liked it, and I was very confused as to what they were trying to do. Antidote didn't help either. Was SHM gone? At least they didn't really deserve the word "House" in their moniker at this point. But the success was still there, and still growing, and they got to perform at Madison Square Garden in December 2011. They were the first electronic music act to ever book this place. And it got sold out in less than 10 minutes.

Thank God for Greyhound, which again reminded us why those guys were the best in the industry. This level of production, of richness in Dance Music, was (and still is) unmatched to this day. The boys were back, and the icing on the cake were the Masquerade Motel gigs, which were obviously very different of their Dark Forest gigs 3 years before that, but still huge shows.

As things looked bright again with the announce of a huge show at the Milton Keynes Bowl in July 2012, they also announced that their next tour would be the last. The whole industry got shaken to its core by this very piece of news - why are they putting an end to it? The Leave The World Behind documentary doesn't give us any concrete answer. They released a farewell track, Don't You Worry Child, played at the MKB for the 1st time, released another compilation called Until Now (which is good, but got less House and more Big Room. This could be a turnoff to some people), and then went on to their last tour ever.

They started their "One Last Tour", a total of 50 gigs all around the world, starting from their hometown Stockholm in Sweden. One gig per night, which means they were touring like a rock band, and focused a lot more on the production of the show (more pre-recorded transitions than ever). This tour ended where the SHM madness "officially" started, at the Ultra Music Festival in March 2013. All the big names of the industry came to see this historical moment. A huge hole was left in the industry for a while, as the entity who set the trends officially died. But the 3 went on to their solo careers.

They reunited 5 years later. Who knows what this reunion will give us. Let's hope for some authenticity again.
Reply Notify me 3 Helpful

August 1, 2012
Three greasy divas making cheap radio hits only for the money, as shown in documentaries and interviews.
Reply Notify me 21 Helpful