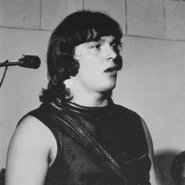 Real Name:
Victor Roy Dauvin
Profile:
Canadian singer, songwriter and drummer. He was drummer for Halifax band The Continentals in the early 1960s, who merged with another Halifax band named The Untouchables and moved to Toronto in 1966 where they would become The Stitch In Tyme. In late 1968 that band broke up and Dauvin joined Lighthouse as vocalist, staying with them through their first three albums until 1970.

In 1972 he started a solo career using the mononym Pinky, under which he released three singles for United Artists. In 1973 he changed his act name to The Pinky Dauvin Group for his fourth UA single. By 1974 he had moved on from his solo attempt and headed the group The British Are Here, who disbanded by the end of the year.