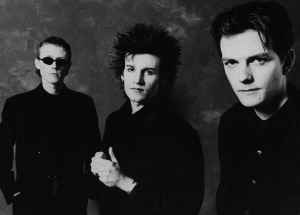 Profile:
Love and Rockets were an English alternative rock band formed in 1985 by former Bauhaus members Daniel Ash (vocals, guitar and saxophone), David J (bass guitar and vocals) and Kevin Haskins (drums and synthesisers) after that group split in 1983. After performing in Toronto in April, 1999, Love and Rockets disbanded. They reformed in 2007 and played several concerts up until 2008. In an interview in June 2009, Ash emphatically stated that he had no further plans to play with Love and Rockets.
Sites:
loveandrockets.com, MySpace, Wikipedia
Aliases:
The Bubblemen
Members:
Daniel Ash, David Haskins, Kevin Haskins
Variations:
Viewing All | Love And Rockets
L. And R., Love & Rockers, Love & Rockets, Love + Rockets, Love And Rockets!, Rockets

April 12, 2022
The Love and Rockets reissues cut by Kevin Gray, pressed at QRP and in Stoughton jackets are so incredibly under the radar as far as amazing releases are concerned. It's amazing how few of these the pressed. I remember seeing them on shelves for years after the were released. I think they were $20-25 at the time. If they were all released in today's market, not only would they retail for $50, but there would be so much demand. If you can pick them up, do yourself a favor and do it. This is exactly how you do a reissue