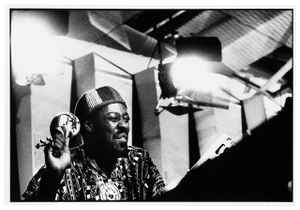 Real Name:
Amos Leon Thomas Jr.
Profile:
Leon Thomas (born October 4, 1937 – died May 8, 1999) was an American jazz singer, who made his mark in 1969, singing "The Creator Has a Master Plan" with Pharoah Sanders and showing that even avant-garde jazz can become popular under some circumstances. A fairly conventional singer, the most unusual aspect to Thomas was that he often broke out into yodelling in the middle of a vocal, a device since utilized occasionally by James Moody.

He also appeared as a sideman in many situations, including on a Louis Armstrong 1970 record and with Carlos Santana (who he worked with in 1973-1974). Thomas died of heart failure on May 8, 1999 .
In Groups:
Santana, The Leon Thomas Blues Band
Variations:
Viewing All | Leon Thomas
A.L. Thomas, Amos Leon Thomas, Amosis Leontopolis Thomas, L Thomas, L. Thomas, L.Thomas, Leone Thomas, T. Leon, Thomas, Thomas Leon, レオントーマス