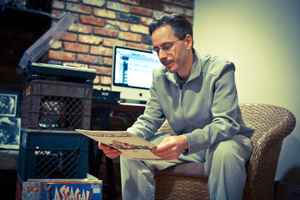 Real Name:
Matthew Fowler
Profile:
Mumbles (son of Jazz Musician Steve Fowler) has lived a life rich with musical diversity and spiritual inspiration. Raised in a family of professional jazz musicians he developed an ear for jazz and hip-hop music at an early age. After being inspired by the production and record collections of his older brother Dj Marvksi and Cut Chemist (Jurassic 5) in the early nineties, Mumbles decided to embark on his own mission of record digging, sampling, and beat re-construction. This led to a collaboration In 1998 with Aceyalone called “A Book of Human Language”, which has since been widely acclaimed as an underground hip-hop classic.

Mumbles continues his quest of fusing the sacred sounds of the East with the Hip-Hop culture of the West.
Sites:
Bandcamp, Facebook
Aliases:
Matthew 'Mumbles' Fowler
In Groups:
S.E.V.A.
Variations:
Viewing All | Mumbles
Mumbless