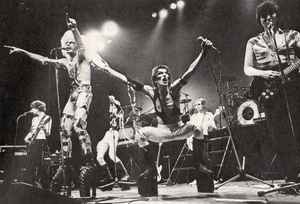 The Tubes scored their first hit "White Punks on Dope," on their self-titled debut album released on A&M records. Their second album, “Young And Rich," included their second hit single – the suggestive duet “Don't Touch Me There." The Tubes released three more albums on A&M before being dropped in 1982. Capitol Records signed them upon their release from A&M and they released their most successful album to date, the concept album “The Completion Backward Principle."

“The Completion Backward Principle," contained the hits, “Don't Want To Wait Anymore," “Sushi Girl,” and the classic rock staple “Talk To You Later."

Their next release on Capitol was "Outside Inside," which featured the top 10 US single “She's A Beauty."

In 1985 The Tubes released “Love Bomb," which was not a commercial success and years of expensive tours left the band a half million dollars in debt. Capitol dropped the Tubes and lead singer Fee Waybill left the band.

December 28, 2021
Mused over the lyrics as a teenager and it was only 40 years later when I discovered why a 'baby's arm holding an apple' might figure on a list of what you may want from life.

Similarly on Young and Rich's Don't Touch Me There when our 'rude bits' rub together - rivets you fool!

First three albums some of the greatest of the time. Remote Control more commercial and the Capitol releases even more so - some good stuff (TV is King) but not in the same league as, say, Hit Parade or Strung Out On Strings.

Fee fell off the stage in Leicester in 1978 so my Newcastle ticket hobbled off with him and my chance to see that stage show. Did see them in 2016 at The Sage in Gateshead. Still a great show.
Reply Notify me Helpful

November 20, 2016
Wonderful cult band, but not that obscure when u think about it. 1st Lp and Young And Rich are essential. Also Remote Control (produced by Todd Rundgren) has got to be heard.
Reply  See 3 replies Notify me 1 Helpful

Merzdős number by lehapanin666
ARTISTS I SAW “LIVE" by tiopepe
Live Shows by GothicGuru
Artists I've Seen " Live In Concert"... by Klaus_L
Progressive Rock by BassLobster
My 100 Best Live Gigs by expensivebeingpunk
Artists I would love to see / to have seen live by slysoul
SCTV by crimsonmetal74
Artists for the Future by Milesbeet-hoven1
Psych, Prog + Spacerock + Mathrock + Postrock + Artrock by TiemoOTheYordle
seen or worked for by Count-Zero
Concerts '80s by noxxio
Artists in My LP Collection by sillypenta
80's Mega Collection by eeeben
my favorite bands by giovanni64
View More Lists →