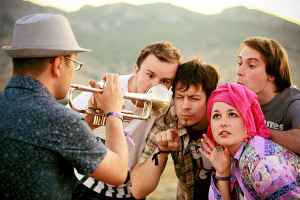 Real Name:
Perfect Me
Profile:
If you haven't heard of the band Perfect Me before, you might think that the band members have somewhat of an inflated ego. But when the band name was born, the collective consisted of just two members and the word "perfect" was meant to reflect their creativity and desire to better themselves. Now Perfect Me is a complete five-piece band and can be righteously called perfect. Perfect Me music successfully fuses elusive melodies, original rhythmic structures and emotional female vocals which all deliver the sound up to par with the european scene.

In the beginning of 2010 the band released their first single The Place That I Call Home on russian label 3PBeats Records. The record has a studio outtake "Best Kept Secret" which in the future was used as a soundtrack for Kaspersky Lab commercial. The single was met with a great interest from public which was followed by the great number of remixes made by DJ's from Russia and Republic of Belarus. A collection of these remixes called The Place That I Call Home (Remixes) was released under the american label Lifted Sounds Records. During the same year the band was rehearsing their live performance and debuted as a live band in November 2010 Crazy Milk club, Moscow.

The band greeted 2011 with a solo performance at the Union Of Composers jazz club. Shortly after they returned to studio work and presented a new track Against the Tide as a self-produced promo video.

In the beginning of September 2011 the band take a part in Art Boulevard festival with such headliners like Grim Brothers, Yulia Savicheva, End of Movie and others.

In the meantime Perfect Me finished working on their debut album, scheduled for release late autumn 2011.

Search for Perfect Me