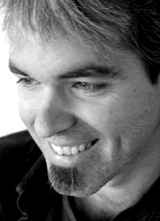 His music has been broadcasted in Canada and abroad, and it can also be heard on film and in installations. Christian Bouchard also works as a audio engineer and sound designer for film and video.