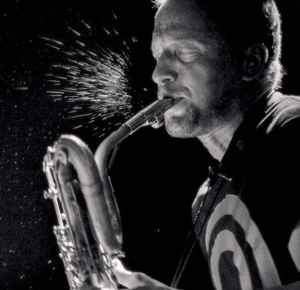 His extended saxophone techniques draw equally from the fiery free jazz blowing tradition and the European microtonal schools. Born in 1964 in the culturally rich area of Umeå, he was exposed at a young age to various Swedish improvisers such as saxophonist Lars Göran Ulander and pianist Per Henrik Wallin. His first instrument was the flute, but by his early teens, Gustafsson was playing saxophone as well. Around the age of 14, he put a saxophone mouthpiece on his flute to bring an instrument along on a trip, and since then has played this creation, the fluteophone, in addition to other, more standard reed instruments.

His first improvisations were with drummer Kjell Nordeson, who would later form the AALY Trio with Gustafsson. Mats Gustafsson moved to Stockholm in the mid-'80s, and there met musicians such as Sten Sandell and Raymond Strid. The three formed Gush in 1988, two years after Gustafsson's duo with Christian Munthe, Two Slices of Acoustic Car, began. He also worked with Berlin-based Sven-Åke Johansson during this time, thus becoming acquainted with the German scene.