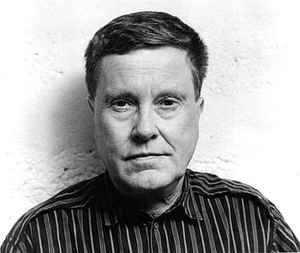 He received his musical education in the sphere of Composition and Jazz, and being an artist at the same time, he has been involved in the experimental music and poetry since the early 1960s. Musical courses which he took in Darmstadt (courses delivered by Stockhausen and Ligeti, 1961) and impressions of Cage’s music focused his own creative interests on the frontier sound and verbal area, that was later named Text-Sound Composition (the term was coined in collaboration with Bengt Emil Johnson, later it was internationally accepted). In 1962 he was one of the founders (member of the Board in 1962-69, President since 1969 till 1972) of the Fylkingen Society for New Music and Intermedia, – one of the key phenomena of the experimental-poetic and musical art in Sweden. Being an active member of the Fylkingen” group he worked much with the combined text, making use of various musical and visual elements (for instance, dancers, singers, film- and slides- projections, 8-channel sounding and other effects were used in the intermedia-composition Clouds, 1976). His works For Jon-fragments of a time to come (cantata for radio, 1977) and Wonder-void” (music-dramatic composition for radio, 1990) were presented by the National Swedish radio at the international contest Prix Italia as representing Sweden. He is the author of numerous radio pieces, his works were broadcast by dozens of radio stations, including the Swedish Radio, Belgian Radio, WDR and many others, and were issued by numerous recording studios, such as Wergo and Folkways. Since 1971 till 1977 he was a member of the Board of the Swedish Composers Union, since 1978 – a member of the Royal Academy of Music, and since 1982 till 1990 – a member of its Chairing Council. For ten years Bodin was director of the of the Institute for Electro-Acoustic Music (1979-89), he was a member of the Managing Council of the State Institute for Nationwide Concerts (1976-82), and he was also one of the founders (1982) and a member of the Chairing Council of the UNESCO International Confederation of Electro-Acoustic Music (1982-92). He taught Musical Theory and Composition at various educational institutions in Sweden and abroad, including such as Mills College (California, USA), Musikhögskolan (Stockholm), Swedish Institute for Electro-acoustic Music (Stockholm), Dartmouth College (Hanover) and so on. In 1987 he was elected Honorary member of the SEAMUS (The Society for Electro-Acoustic Music, USA). In 1978-92 he 12 times was a jury member of the International Electro-Acoustic Music Competition in Bourges (France), since 1993 till 1995 – a jury member of the International computer music competition at the Ars Electronica in Linz (Austria). He is the holder of various awards and prizes, including The Hilding Rosenberg Prize (nomination composer, 1984), The Stockholm Town Award (nomination artist, 1986), The Magisterium Prize (Bourges, France, 1996). One of his recent works – a composition Bob, the Life Manager (1997) was selected by the Swedish radio for the International contest Prix Italia to represent Sweden. He lived and worked in Stockholm.
Sites:
Bandcamp, Wikipedia
In Groups:
Freskkvartetten
Variations:
Viewing All | Lars-Gunnar Bodin
Bodin, Gunnar Bodin, Lars Gunnar Bodin