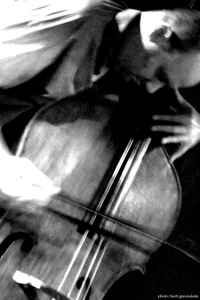 Profile:
Since the early 1990s Nicolas Caloia has worked at creating a contemporary music generated by using accurately composed textures to channel collective improvisation. The goal is a music that erases the lines between improvised and composed, pop and avant-garde, good and bad. He hopes this music will satisfy the body, the mind and, above all, the heart.

He has worked as a performer, composer, and organizer in Montreal and has toured in North America, Europe, and Asia. He has performed and recorded in a vast array of contexts with the most important members of Montreal's creative music community as well as with internationally renowned musicians like Marshall Allen, John Butcher, Joe McPhee, Steve Lacy, Hassan Hakmoun, Tristan Honsinger and Pandit Hariprasad Chaurasia. His concerts and recordings have been critically acclaimed both at home and abroad.
Sites:
nicolascaloia.net
In Groups:
Ensemble SuperMusique, In The Sea, Land Of Kush, Mercury (29), Montreal-Toronto Art Orchestra, Ratchet Orchestra, Tilting
Variations:
Viewing All | Nicolas Caloia
Caloia, Nicholas Caloia, Paul Nicolas Caloia