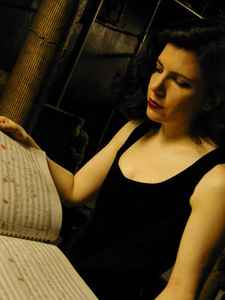 Profile:
ANNIE GOSFIELD (born September 11, 1960 in Philadelphia) is a composer, keyboardist and improviser based in downtown New York. She divides her times between composing for chamber ensembles and performing with her own group. Her music combines traditional an non-traditional techniques, and is often inspired by unorthodox and non-musical sources. Gosfield's work with her own ensemble couples her unusal sampling methods with electric guitar and percussion to create music that incorporates samples of factory noise, detuned instruments and a wealth of unrecognizably altered sounds. Her music has been performed and commissioned by The Bang on a Can All Stars, The Rova Saxophone Quartet, Newband/the Harry Partch instruments, The West Australia Symphony Orchestra New Music Group, The Crosstown Ensemble, Agon Orchestra, Zeitgeist, Pearls Before Swine, Present Music, Relâche and many others. Recent works include Cranks and Cactus Needles, for flute, piano, violin and cello, which evokes the crackles, warps and surface noise of an old 78 RPM record, and Shoot the Player Piano, a video work for an imagery orchestra of aged mechanical instruments. Her discography includes recordings on Tzadik, Sonny Classical, CRI, Wergo, Harmonia Mundi, Staalplaat, Atavistic and EMF.
Sites:
anniegosfield.com, Wikipedia