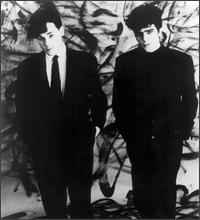 Profile:
Billy MacKenzie and Alan Rankine formed The Associates in Dundee, Scotland, in 1976. They released a self-funded 7" of Boys Keep Swinging mere weeks after David Bowie had released his original. This scam got them a publishing deal with Bowie's publishers and a proper record deal.

By 1980 they were touring with The Cure and signed to Fiction Records, for whom they recorded The Affectionate Punch. At the turn of the year they relocated to Situation Two and put out a string of singles, later compiled on the album Fourth Drawer Down, recorded using money from major labels who were expecting demos to be produced with their cash. In tandem with their increasing consumption of cocaine and speed, the group's music became increasingly deranged and experimental. John Murphy and Michael Dempsey (ex-The Cure) became official members.

The Associates signed with WEA in 1982. Martha Ladly joined as back-up singer. Billy and Alan immediately scored a string of UK top 20 chart hits. The album Sulk made the UK top 10, winning album of the year awards in the UK music press. The group’s drug use was at a peak - Billy and Alan’s behaviour was becoming somewhat erratic. On the eve of their biggest ever UK tour MacKenzie pulled out. A US deal with Island was consequentially lost. Deciding that he couldn't continue, Alan Rankine left the group. From this moment on, the Associates were to be just that: Billy MacKenzie solo, with different associates for each release.

MacKenzie started recording a follow-up album. 1984s Perhaps cost WEA £250,000. It took three years and four production teams to record - twice (dissatisfied with the original production Billy "lost" the first versions' master tapes, forcing a re-recording). The album had some chart success, but WEA were dissatisfied, and started pressuring MacKenzie to follow a more straightforward pop-soul direction. Frustrated by WEA's lack of support, MacKenzie focussed on collaborations, most notably with Yello (featuring on One Second, Flag, Baby and writing The Rhythm Divine).

1988's comeback single, a cover of Blondie's Heart Of Glass, failed to chart. WEA refused to release its parent album, The Glamour Chase, and with MacKenzie over a million pounds in debt to the label The Associates were dropped.

Circa quickly signed MacKenzie and in 1990 released Wild And Lonely, the last album of original music under the The Associates name. 1992's album, the Thomas Fehlmann / Boris Blank-produced Outernational was issued under the artist name Billy MacKenzie. Even though the album had good reviews in the press and Baby was single of the week in Melody Maker, the album stiffed - partially due to Circa winding down operations.

Aside from an aborted Associates reunion with Alan Rankine in the mid-90s, MacKenzie remained a solo artist, collaborating in the 90s with Peach, Barry Adamson, Paul Haig and Apollo Four Forty amongst others. At the end of 1996, after four years without a deal, he signed with Nude Records.

Tragically his first release for the label was a posthumous one. The death of his mother in 1996 was likely the trigger of an emotional breakdown that led him deeper and deeper into a depressed state. Billy MacKenzie died aged 39, on 22nd January 1997 from an overdose of prescribed and over-the-counter pills.
Sites:
billymackenzie.com, mdmmedia.com, Wikipedia, affectionate.bunch.pagesperso-orange.fr, Facebook, Facebook
Aliases:
39 Lyon Street
Members:
Alan Rankine, Billy MacKenzie, John Murphy, Martha Ladly, Michael Dempsey, Steve Reid
Variations:
Viewing All | The Associates
A, Asociates, Associates

January 28, 2022
Will somebody please for the love of all that is good PLEASE make a FULL length documentary on Billy. Bono, you wrote the intro to his biography, maybe you could throw some spare change towards starting a crowd funding process? Anyone who has had the privilege of reading the book KNOWS now THAT'S a story that HAS to be told and seen to be believed and most of all for Billy to ever TRULY be understood. May he R.I.P eternal
Reply Notify me 3 Helpful

Well, if it was any band that should still be alive today, it's the Associates. They took Joy Division's sound, added much higher vocals, and evolved their ideas tenfold.
Recommended Albums: Sulk, Fourth Drawer Down, The Radio 1 Sessions (1981-1983), Singles.
After the loss of Alan Rankine, Billy MacKenzie couldn't replace the unique ideas and sounds that Alan had produced, so after Perhaps, the synth-punk sound was lost amongst the drum machines and digital synths.
Associates definitely have to be one of the most underrated names in synth-punk.