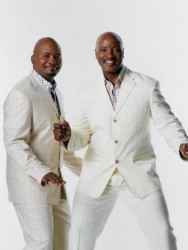 Consisting of twin brothers Marc Rantseli and Alex Rantseli, they were signed up by Tusk Music's Benjy Mudie and released their successful eponymous debut album in 1988, grabbing the "Best Newcomer" title at the following OKTV Awards.

"Boys B Boys" (for the domestic market) followed in 1990, with reworked versions of (some of) the original tunes appearing via ATCO Records and PWL Records that same year on their international and equally eponymous debut.

Although the pair did continue to release new material well into the new millennium, they would never reach the same level of popularity as with their resounding debut/s.
Sites:
Facebook
Members:
Alex Rantseli, Marc Rantseli
Variations:
Viewing All | MarcAlex
Marc Alex, Marcalex