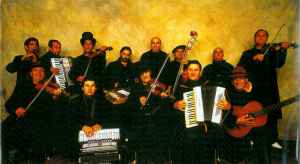 Profile:
Romanian Gypsy taraf (ensemble) from Clejani. Ever since the release of their first album and their appearance in Tony Gatlif's influential Latcho Drom film, Taraf de Haïdouks have been considered as the epitome of Gypsy musics fabulous vitality. Apart from relentlessly touring around the globe, the group has engaged in a series of interesting collaborations: recordings and concert performances with Kronos Quartet, participation as models-cum-musicians in fashion designer Yohji Yamamotos Paris and Tokyo shows, onscreen appearance alongside Johnny Depp and Christina Ricci in Sally Potter's The Man Who Cried (for the soundtrack of which they recorded five pieces) etc. Meanwhile, the band members seem to have been relatively unaffected by all humdrum, they've retained their sense of humour and their way of life (they still reside in their modest village of Clejani, in the Valachian countryside)