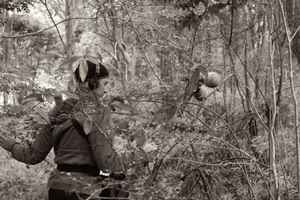 Background in musique concrète and improvisation, using found objects, electroacoustic devices and phonographies.
As a sound recordist, he as particular interest for animals or nature sounds as well as urban/industrial situations and unusual acoustic phenomena. Excursions are pretext to a sonic gathering, and often leads to the realization of phonographic collages.
He often collaborates with other musicians, visual artists and dancers, producing audio-visual performances, publications or installations. Independent sound designer and sound mixer for cinema: documentary films, short films, fiction and experimental cinema.
He is based in Taiwan since 2007, interested into the field of anthropology and ecology, exploring the island's soundscape through artistic research, developing art projects in local communities (Hakka, Atayal) and documenting the fauna and its environment, creating art & science projects in collaborations with biologists. Involved in projects related to coral reefs in Penghu and mountain forests in Northern Taiwan.