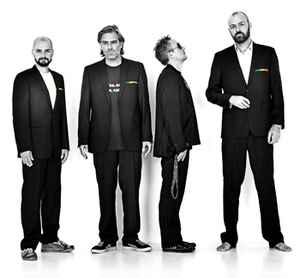 Profile:
Danish group founded in 1966 by Peter A.G. Nielsen and his brother Jens G. Nielsen. As a psychedelic quartet they released a single in 1969. In 1973 they surfaced again, now a larger group playing more folkish, political rock. After a decade of rock Gnags in the early 80's turned their music towards pop-reggae, having Jack Nuber and Karl Pitterson produce some of their albums. At that time their studio, Feedback, had become very popular and the band and the studio became the epicenter of an 80's pop-wave from the City Aarhus, introducing artists such as Thomas Helmig and Mek Pek Party Band who to a wide degree adapted the pop-reggae sound characterizing Gnags and the Feedback studio. From the early 80's to the mid 90's Gnags was one of the most popular, hit-producing acts in Denmark. The group is still active but only performs and releases rarely. Over the years such key members as Jens G. Nielsen (1974-1996) and Per Chr. Frost (1966-1996) have left the group.
Sites:
gnags.dk, MySpace
Members:
Bastian Sjelberg, Dan Dan, Henning Stærk, Ivan Sørensen, Jacob Riis-Olsen, Jens G. Nielsen, Mads Michelsen, Mika Vandborg, Ole Poulsen, Per Frost, Peter A.G. Nielsen, Sven Fenger
Variations:
Viewing All | Gnags
Gnax, Those GNAGS