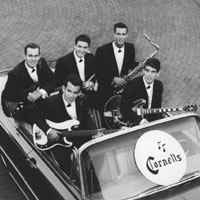 Profile:
The Cornells were a 1960s Los Angeles band that played mostly surf music.Four of the five members had a parent who was a well-known celebrity. The band appeared on the show 'I've Got a Secret' in 1963 with the secret "We're all the sons of Hollywood Celebrities." They played the song Caravan live on the show.