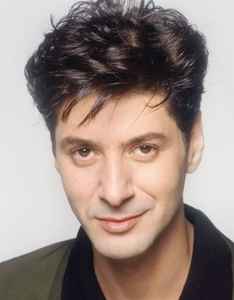 Real Name:
Étienne Daho
Profile:
Étienne Daho (born January 14, 1956 in Oran, Algeria) is a French singer who has racked up an extensive number of synth-driven and rock-influenced pop hits in the French-speaking world since 1981. He ended up in the city of Rennes during the 60s when his mother got a job in a local hospital. As a teen, he hung around with Guillaume Israel from the band Modern Guy, but also some members of Marquis De Sade. During the fall of 1979, he recorded his first songs with Richard Dumas on guitar, then in June 1980, he performed 5 songs live at MJC La Paillette, in Rennes. His first LP was released in 1981 with some fellow musicians of MdS. The release of his single Tombé Pour La France in 1985 created a real "Dahomania" all around the country. In 2010, Daho celebrated 30 years of career and is still around.

He sings in a low, whispery voice somewhat akin to Leonard Cohen or Benjamin Biolay, and his music videos establish his innovative and creative flair visually. He cites Françoise Hardy as one of his main influences.

January 8, 2022
I agree with maxai. It's a bit bizarre that this man, once considered the most British of French singers, has so few comments. Etienne Daho is still turning out interesting work, sometimes reworkings and remixes of old tracks (such as "Il ne dira pas"), sometimes left field ("La Condamné à mort" with Jeanne Moreau), sometimes on the button ("Virus X" with Italoconnection - in its various remixes). He is a feature of French pop music and his concerts rock. Eden is also my favourite album. Catch him while he's still with us!

September 28, 2018
Etienne Daho has been around for almost four decades so it is a bit strange there are no comments. At his best Daho provides good, sparkly French pop and chansons d'amour.

Eden is my favourite Daho album. L'Homme Qui Marche is a good anthology of his whole span of work (and the double, clear vinyl version is immaculately produced).
See 5 replies