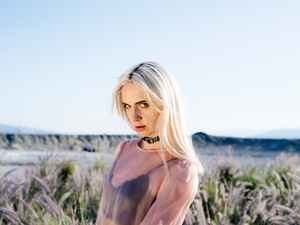 Danish singer Karen Marie Ørsted first made an impact on the music scene under the moniker MØ in 2013, when she lent her vocals to Swedish producer Avicii's song "Dear Boy," from his hit album True. Born in Odense, Ørsted has pursued music since she received a Spice Girls CD when she was ten years old. As she matured, her influences matured too, with the likes of Yeah Yeah Yeahs, Sonic Youth, and the Smashing Pumpkins inspiring her electro indie pop sound. She soon took to writing her own music and in 2012 she was invited to appear at the CMJ music showcase in New York, where she garnered positive reviews. The following year, Ørsted released the single "Pilgrim," which showcased her beat-driven music alongside glitchy electronics and sparse guitar melodies that underpinned her sultry vocals. Later in 2013 her popularity rose after her voice appeared on Avicii's track, and again on the back of second single "X*X 88," which featured Diplo and garnered comparisons to contemporaries AlunaGeorge and Grimes. Her eagerly anticipated debut full-length, No Mythologies to Follow, came out in 2014.
Sites:
Facebook, Twitter, instagram.com, SoundCloud, YouTube, MySpace, moendoftheworld.tumblr.com, momomoyouth.com, plus.google.com, Wikipedia
Aliases:
Karen Marie Ørsted
Variations:
Viewing All | MØ
Li Mo, M.0, M.O, M.O., M0, MO, Mo, MØMØMØ, Mø