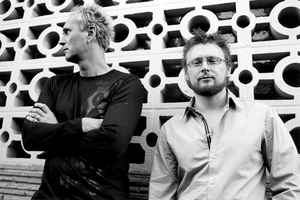 Profile:
Synaesthesia is yet another project from Leeb & Fulber for which to further explore their ambient ideas. Lush strings and tribal chants both add to the flavouring of the overall sound. Due to contractual entanglements Leeb and Fulber were not originally able to admit they were behind the music. The first two albums list them as producers and credit the music to one R. Deckard, alluding to the main character from Blade Runner. By their third album Leeb was credited with the music. Fulber, who had recently left to pursue solo projects, was credited with programming.
Sites:
mindphaser.com, Bandcamp, Wikipedia
Aliases:
Delerium, Noise Unit, R. Deckard
Members:
Bill Leeb, Rhys Fulber
Variations:
Viewing All | Synaesthesia
Synaethesia, Synæsthesia