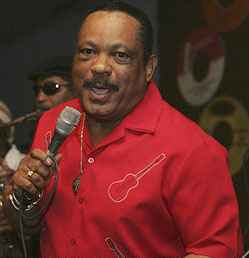 Son of Langston and Ruthie Bell, he is the second oldest of seven brothers, including Ricky Bell, USC and NFL football player, and Jerry Bell, former world Karate champion and singer. He also is related to producer Thom Bell. Bell started singing in Houston night clubs at age ten, influenced by performances of Jackie Wilson and Sam Cooke. He formed the Drells in 1966 while in high school. With the Drells he recorded the hit “Tighten Up”. Since the breakup of the Drells in 1980, Bell has pursued a solo career and recorded the album “I Never Had It So Good” (1981) for Beckett Records. Eventually he continued to perform with the Drells until the 1990s.
Sites:
Wikipedia, bluesmusicnow.com
In Groups:
Archie Bell & The Drells, Philadelphia International All Stars, The Four Singing Avalons
Variations:
Viewing All | Archie Bell
A Bell, A. Bell, A. Vell, A.Bell, Archie Drell, Bell, Bill