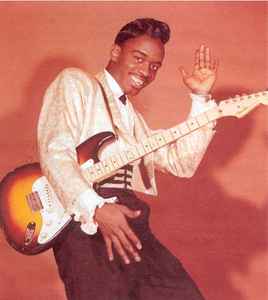 Seminal electric blues & rhythm & blues guitarist of the mid-1950s, with hits like "Gangster Of Love". Performed with artists such as Little Richard and worked in synthesizer productions in the 1960s.

In later years his work was a source for sampling by artists such as Dr Dre and Snoop Dogg. He also worked on a number of recordings and projects with Frank Zappa, who cites Watson: "Watson's 1956 song, 'Three Hours Past Midnight' inspired me to become a guitarist."

Johnny Guitar Watson was a real rocker. In the 50's he made advanced (for decades ahead) records like space guitar. He's discovered and played in the Johnny Otis Show 'headspinning & guitar playing with his mouth' with some of the most crucial R&B acts (since R & B is founded). His reputation was equally to B.B. King's and his outstanding guitar playing can be compared to Syl Johnson's (sang 'I resign'(50's), Different Strokes' (60's), 'Is it because I'm black' (70's) - both are excellent guitar players and vocalists).

Johnny 'Guitar' Watson's carreer in the 70's was in the DISCO-scene. Styled like a mix of P-Diddy ('master pimp in white suits') & Lil'John (& Eastside Boyz - rude boy with flashing gold tooth/diamond inlay) he sangs and plays ruff things: 'Ain't that a bitch'/'Gangster of Love'/'What The Hell Is This'/'A Real Mother For Ya' (& many more tracks).

Definitly a Joker in the black music game (you must have like James Brown to see where is HipHop coming from (it's not out of the blue)).