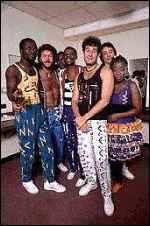 Profile:
Savuka (based on the Zulu word for the phrase "we have arisen") was formed by Johnny Clegg in 1986 after the demise of his musical partnership with Sipho Mchunu as Juluka.
Whereas Juluka were more of a local cultural curiosity and crossover project during the height of apartheid and the pair’s musical relationship was often subjected to racial abuse, threats of violence and police harassment, Savuka went one bold step further: multi-racial, of course, but they also had a political agenda. The issue of racial and social injustice, which has been at the core of so much of Johnny Clegg’s work over the years, was more prominent.

Says Clegg: "Savuka was launched in the State of Emergency, 1986. The entire album was hard-hitting, it was directly political and it had very strong political metaphors. That’s the album I wrote the song for Mandela and released it commercially inside South Africa, that’s the album which was also restricted and banned, the video was heavily banned."
"Musically, Savuka tended to be more of an international melange, it was more rock, it was more hard, it was a harder edge sound and we were not drawing just on Zulu guitar. I drew on many other influences. I drew on Zimbabwean guitar music, I drew on Zairian music, I drew on Latin-American rhythms and even in the last album I drew on a traditional Hindu prayer song."

The breakthrough album was "Third World Child" in 1987 but their success reached its zenith with "Cruel, Crazy Beautiful World" (1989) which was followed by "Heat, Dust & Dreams" (nominated for a Grammy) in 1993.

Also in 1993, percussionist Dudu "Zulu" Ndlovu was assassinated in a conspiracy relating to a taxi war, and Savuka was terminated that same year.