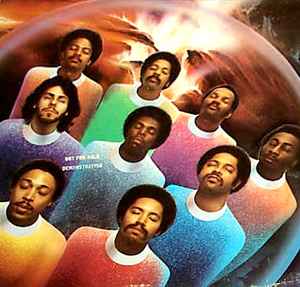 Formed in 1976, growing out of the Cleveland - Ohio jazz fusion band, Bell Telefunk, composed of lead guitarist - songwriter Michael Calhoun, percussionist Kenny Pettus, drummer Isaac Wiley, Jr. his brother, bassist Michael Wiley, vocalist Ron Thatch and the band Mother Braintree.
The group became known as Kinsman Dazz, named after both the street and the lounge where they worked as the house band: Sonny Jones' Kinsman Grill Lounge.
The group adopted its name before the song "Dazz" became an R&B hit for Atlanta's Brick in 1976.
Kinsman Dazz was signed to 20th Century Fox Records by Joe Lewis in 1978.
The group went to Los Angeles to record for producer Marvin Gaye.
Owing to illness, Gaye had to back out of the duties.
Harris requested and got Philip Bailey, the vocalist of Earth, Wind & Fire, to produce the group's first album, "Kinsman Dazz".
Bailey would co-produce the second album, "Dazz", and had a major input into the group's vocal arrangements.
They released their first single, "I Might As Well Forget About Loving You", in late 1978.
"Catchin' Up On Love" followed in 1979. Kinsman Dazz became the Dazz Band in 1980.
Separately, 20th Century Fox Records was closed and the Dazz Band was signed to Motown.

Other members of Bell Telefunk and Mother Brain Tree, included: